Faserwerk integrates a viscoelastic damping layer into their new carbon handlebar that reduces vibrations by a significant amount. The 189 g light, 800 mm wide handlebar withstands the most stringent testing.

Faserwerk is a new component brand of kreuz+quer, the company behind bike brand ARC8 and bicycle.engineering. Thanks to an investment in a manufacturing facility in Taiwan, we are in full control over all aspects of the product, be it design, layup, production process, quality control or testing. As a start, we have a carbon seat post and a carbon riser bar. More to come!

The Rockstock is not only Faserwerk's first handlebar, but the first carbon handlebar on the market to incorporate a viscoelastic layer, reducing vibrations. But let's look at the Rockstock's numbers first:

We think that is not bad at all, before even talking about the damping feature.

Before we can get into the fascinating world of layup development and damping, we have to talk about the design. Design of a handlebar seems easy, but it is not. We went for 6° up sweep and 9° back sweep because that feels the most natural with handlebars only getting wider. 800 mm seems the reasonable upper limit, but there is enough space for the controls to cut it down do 740 mm.

We tested a lot of different designs, and there were two consistent findings in all that testing: Having a smooth transition from the 22.2 mm diameter at the grips to the stem clamping are is key for a light and strong handlebar. And we basically could not find an advantage in using a 35 mm clamp. 31.8 mm would end up being lighter and stronger, and we could not find anyone wishing for a stiffer carbon handlebar. So handlebar design may look very simple, but as testing of other designs showed, it is still a key element for a high perfomance product. 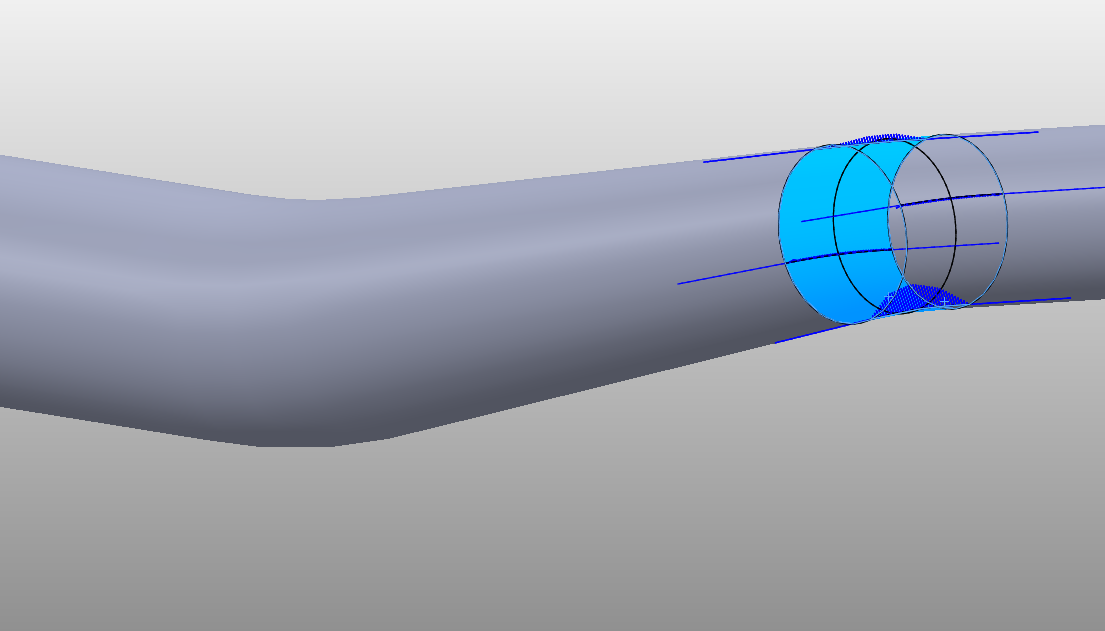 Based on this, we can start designing our laminate ply by ply in Laminate Tools. 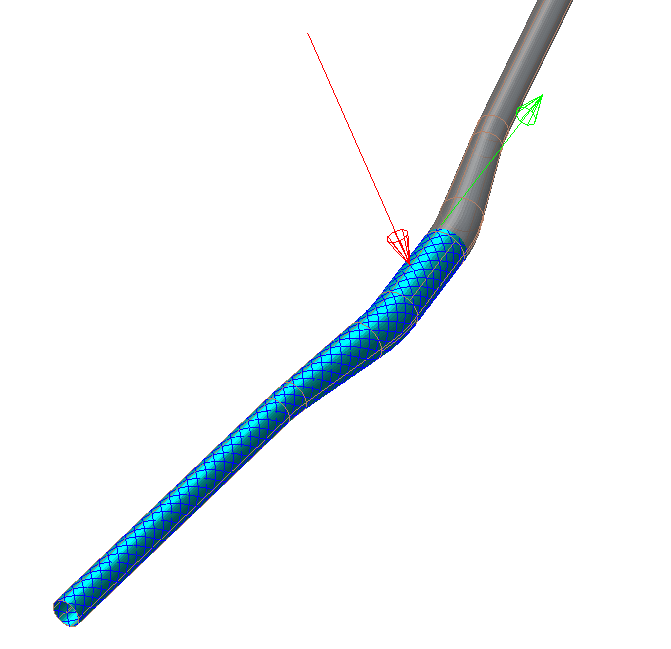 For each ply, we see destortions of the ply we have to expect when wraping it around the mandrel, resulting fiber directions and warnings if there are area with too much distortion which could result in wrinkles or gaps in between fibers. This depends on where you start to apply your ply and in which sequence you wrap it, so we can set that in Laminate Tools. Also, if we force a reinforcement to follow a certain path, Laminate Tools allows us to simulate that, as you can see in th picture below. Such simulations would not be possible in FEA without Laminate Tools. 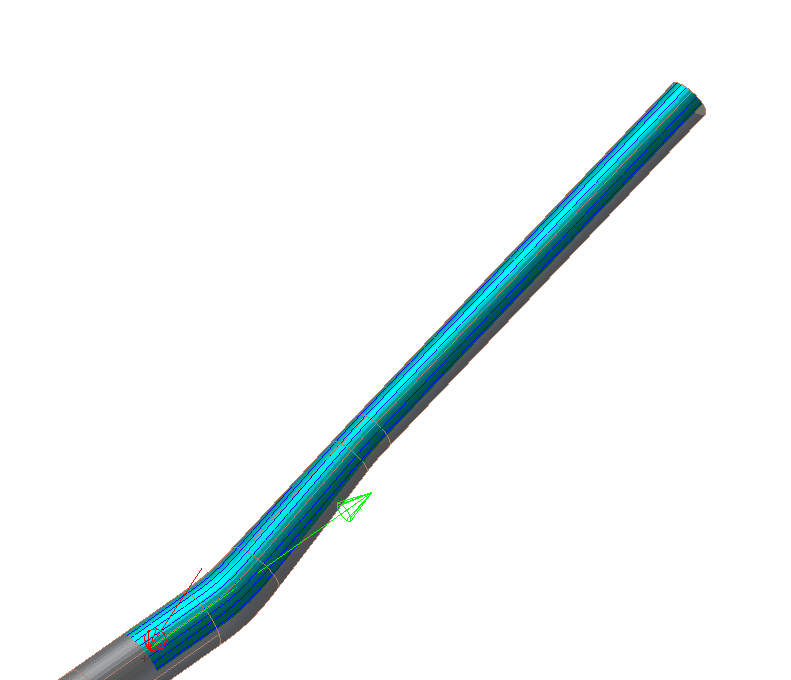 After we have built the layup, we can analyze different aspects of it, like total weight, number of plies, thickness distribution or what fiber directions are present at a certain location of the product. 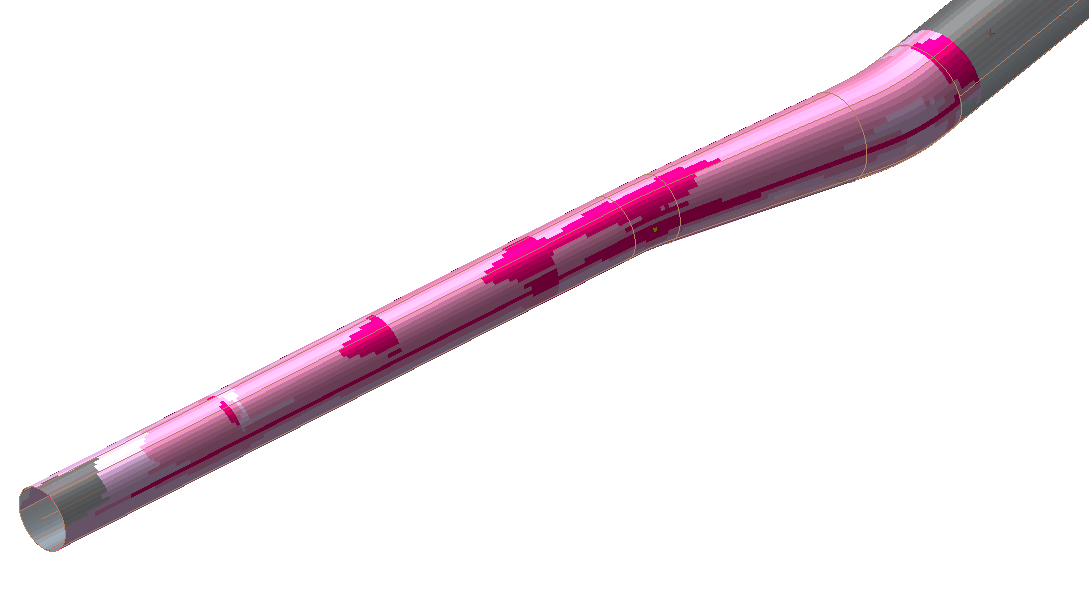 Navigating to an element that fails and creating a stress/failure index plot through the laminate there shows us which layers carry load, and which layers fail. That is not necessarily the same, as a layer that does not carry a lot of load can still fail due to an unsuitable fiber direction. It is also more information than we can get from testing on an actual product. So if we have a failure in testing, going back to Laminate Tools helps us to better understand the failure. 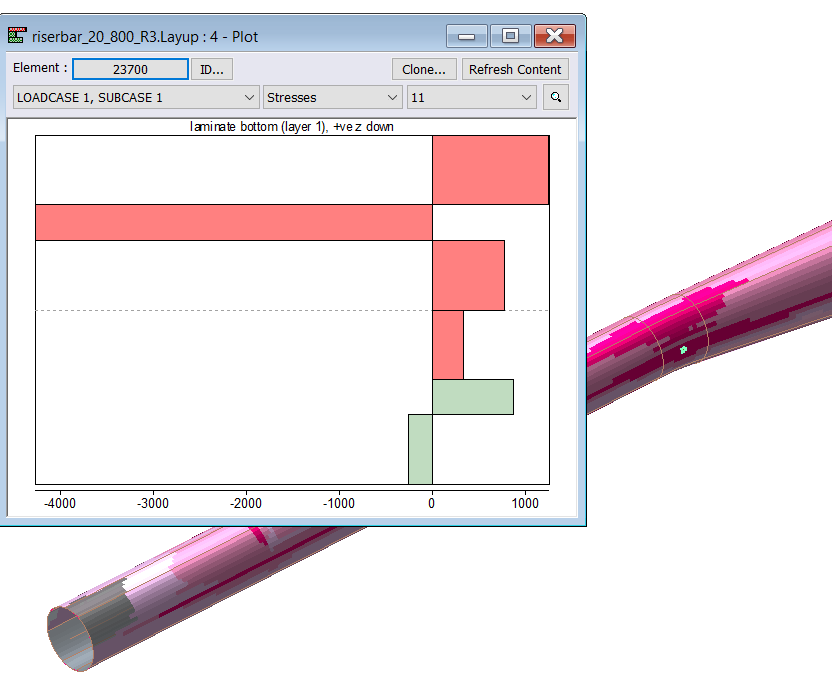 After identifying the reason for failure, modifying the layup and simulating it is done within minutes, a vast difference compared to the hours of work to create a new real sample. So as impressive as the actual numbers of the Rockstock are, it only took 3 iterations of prototypes to get there.

When it comes to carbon bars, there was always one talking point: a lack of comfort. This is why started to look into options to increase damping. We tested various materials and methods. Finally we found one that significantly increases damping without lessening the strength and only adding 5 grams in weight. A viscoelastic layer is embedded in the laminate.

How Does a Viscoelastic Layer Work?

As with all damping, a viscoelastic layer transforms kinetic energy into heat. To go more into detail, when the laminate deforms under load, interlaminar shear deforms the viscoelastic layer. Instead of bouncing back like an undamped spring, internal friction transfoms this work into heat. So we had to identify areas with high interlaminar shear to make best use of the damping material. Thankfully, that was easy since we already had the FEA model where we could identify these areas.

So, how does that translate to what the Rockstock makes different than a carbon bar without viscoelastic damping? If you hit something, your handlebar deflects and bounces back. Without damping, it would now keep swinging forever. Luckily, there is natural damping in a carbon handlebar. With the viscoelastic layer, we achieved double that damping. While double may sound like double as good, the actual effect is much bigger. Look at the diagram below which shows the response to an impact. With viscoelasic damping (black curve), the vibrations caused by the impact have basically died off 0.3 seconds after the impact, while the sample purely made by carbon (red curve) is still visibly swinging after one second.

Enhanced Control Over Your Bike

Now that we went through the physics of damping, what does that mean for your riding? Imagine you hit something really hard while riding. Your handlebar will deflect significantly, more than 20 mm in our impact testing. Which is good, because a) it smoothens your ride and b) it means your handlebar does not break. But what follows is less ideal: without damping, your handlebar keeps wobbling for some time. A wobbling stick between your hands and your bike is certainly not what you want. So the faster we can stop it from wobling, the more precise you can handle your bike. Remember the diagram above: With viscoelastic damping, the wobbling basically disappeared within 0.3 seconds. Without it is still wobbling one second after impact. If you are riding at 36 km/h that means you covered 10 m of trail with less than ideal control of your bike.

Excessive vibrations can cause discomfort and even injuries, as Lewis Kirkwood greatly explained in this interview on Pinkbike. Putting your hand on the handlebar will add damping similarly to what our viscoelastic layer does, but what does that mean? Your body needs to absorb the energy stored in the handlebar. This can lead to effects like arm pump, reduced grip strength, numbness or inflammations. So by adding damping into your handlebar, your riding gets more enjoyable, and you can do that extra run while your friends need to give their arms a rest.

ISO does not specify any impact testing for a MTB handlebar, which seems quite irresponsible. There is however a test for BMX, where a weight of 10 kg drops from 500 mm height onto one end of the handlebar. That is quite a stringent test, but with the Rockstock, we passed double that requirement despite the handlebar only weighing 189 g. 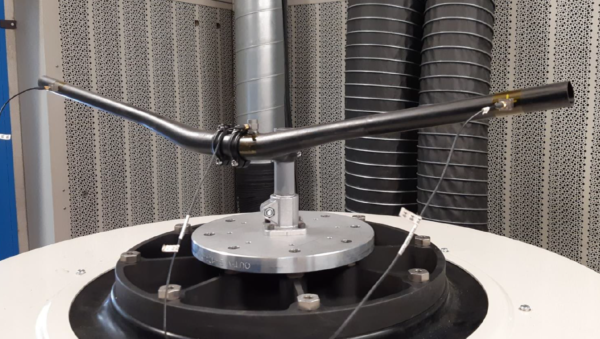 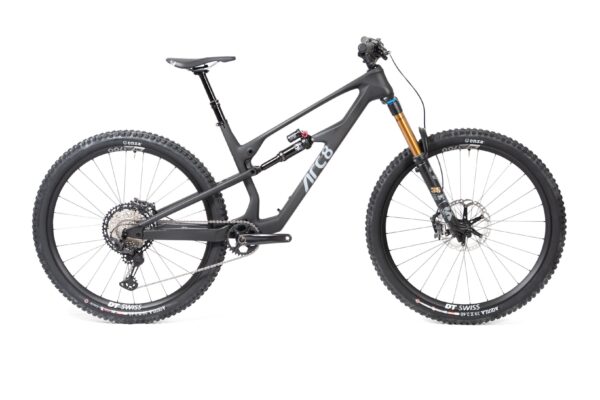 Developing the Extra – A Deep Look Into How It Came Alive

Faserwerk - Parts Made by us – We are Stepping Into Manufacturing!